Cutting-edge science is showing that curcumin is one of the most powerful, natural anti-inflammatories ever studied. Curcumin is so effective because it is a potent inhibitor of the body's most powerful inflammation-causing chemical, called Nf-kappa beta. Miraculously, curcumin has been shown in numerous studies to bring down joint pain and muscle soreness, protect the brain, support cardiovascular health, and bolster immunity. Population studies have shown that elderly villagers in India appear to have the lowest rate of Alzheimer's disease in the world ted that the anti-inflammatory effects of curcumin may be partly responsible. (Alzheimer's begins as an inflammatory process in the brain, and Indians eat turmeric with almost every meal). 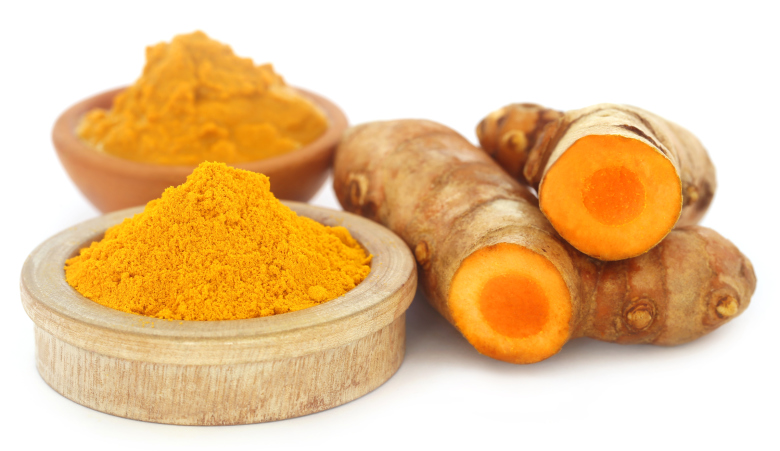 Curcuminoid polyphenols are the primary antioxidant in turmeric root. Curcumin is the principle curcuminoid, and it is responsible for the majority of health benefits attributed to turmeric. The other curcuminoids include desmethoxycurcumin and bis-desmethoxycurcumin.
Blood sugar imbalances and insulin resistance are huge factors that promote inflammatory conditions in the body. Elevated blood sugar creates hazardous glucose cross-links with proteins, causing Advanced Glycolytic Enzymes (AGEs) to form. These AGEs damage cell membranes, vital enzyme systems and perpetuate inflammatory conditions throughout the body.
Curcumin modulates blood sugar and improves insulin receptor function by improving its binding capacity to sugar. Curcumin activates PPAR (peroxisome proliferator-activator receptor), which is a group of key nuclear proteins that regulate gene expression and modulate sugar uptake and utilization in the bloodstream.
Curcumin also reduces the activity of specific liver enzymes that release sugar into the bloodstream while activating enzymes that store sugar as glycogen. Research on diabetic rats resulted in blood glucose stabilization and lowered triglyceride levels in the group that consumed Curcumin.

Curcumin as an antioxidant:

Turmeric is the fourth most antioxidant-rich herb with an Oxygen Radical Absorbance Capacity (ORAC) of 159,277. The curcuminoids boost levels of the body's most potent antioxidants including glutathione, superoxide dismutase and catalase. These molecules are critical for the body to limit oxidative stress-related damage to the vital organ systems.
Curcumin has been shown to reduce inflammation-mediating prostaglandins, cytokines and other molecules such as interleukin 6, nuclear factor-kappa beta (NF-kb) and tumor necrosis factor-alpha (TNF-alpha). With a high enough dosage, this has the ability to pull the body out of a strong inflammatory cascade and reset anti-inflammatory behavior at the cellular level.

Curcumin has antimicrobial properties that can prevent growth of infections due to fungi, bacteria, protozoa or viruses. Anti-fungals are required to treat infections like candidiasis, athlete’s foot, thrush or ringworm. Hence, turmeric could benefit the treatment of yeast infections that are caused by a fungus. Turmeric can be an effective treatment of Candida albicans that causes yeast infections, due to the benefits offered by curcumin, like its ability to strengthen the immune system by increasing CD4 and CD8 counts. These two are glycoproteins that areturmeric for candida yeast infection needed to help the body deal with infections.

Curcumin supplement has been proven effective to help burn fat, and regulate your metabolism to reduce fat storage and give you more energy to live an active lifestyle.