The legendary lingzhi mushroom has been shown to have another potential therapeutic function: to slow the progress of Alzheimer’s disease.
Lingzhi (Ganoderma lucidum), or reishi in Japanese, is a medicinal fungus used clinically in many Asian countries to promote health and longevity. 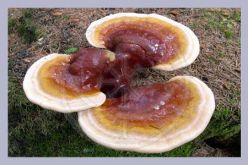 According to the researchers at the University of Hong Kong, synaptic degeneration is a key mode of neurodegeneration in Alzheimer’s disease. Recent studies have shown the loss of synaptic density proteins in each individual neuron during the progression of Alzheimer’s. It was recently reported that β-amyloid could cause synaptic dysfunction and contribute to Alzheimer’s pathology.

Alzheimer’s disease is a progressive neurodegenerative disease and the most common cause of dementia in the elderly. The neuropathology of Alzheimer’s is characterized at first by the deposition of extracellular amyloid plaques and intraneuronal neurofibrillary tangles in the brain, and later by the loss of neurons and their processes.
Alzheimer’s disease is expressed by excessive deposition of the β-amyloid peptide (β-AP) in the central nervous system. Cognitive impairment appears to be most closely correlated in time with the loss of neurons and neuronal processes.

In this study, the Hong Kong researchers reported that aqueous extract of lingzhi significantly attenuated Aβ-induced synaptotoxicity by preserving the synaptic density protein, synaptophysin.
What is synaptophysin? Synaptophysin is a synaptic vesicle glycoprotein with four transmembrane domains. It is present in neuroendocrine cells and in virtually all neurons in the brain and spinal cord that participate in synaptic transmission. It acts as a marker for neuroendocrine tumours.

Taken together, the results prove a hypothesis that anti-aging lingzhi can prevent harmful effects of the exterminating toxin Aβ in Alzheimer’s disease.