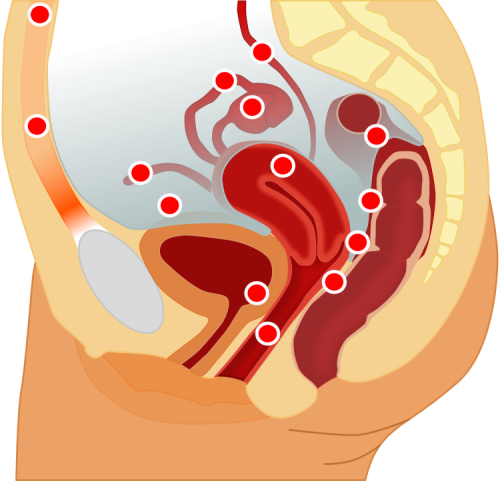 Endometriosis is a condition resulting from the presence of actively growing and functioning endometrial tissue in locations outside the uterus. The areas where endometriosis may occur are widespread and usually multiple. They include:

Occurrence
The incidence of endometriosis is currently on the increase. The following groups may be affected by it:

•       women between the ages of 25-40 who have not had children
•       teenagers (previously not thought to be commonly affected)
•       women who have undergone elective tubal sterilization
•       familial incidence (7% relative risk of developing it if a first-degree female relative has it)
•       there seems to be a correlation between endometriosis and the use of tampons, intercourse during menstruation and the use of the intrauterine contraceptive device (the coil)

Aetiology
Although many theories exist, the pathogenesis of endometriosis is still not fully understood in the Western medical world. The following are some of the most common theories:

•       retrograde menstruation and tubal reflux: proposed by Samson who believed that menstrual blood was forced out along the fallopian tubes into the peritoneal cavity. He suggested that menstrual blood contains fragments of endometrium which may implant on pelvic structures and grow. Excessive uterine contractions characteristic of primary dysmenorrhoea (often present in women with endometriosis) may contribute to a bidirectional menstrual flow from the uterus.
•       celomic metaplasia: proposed by Meyer and Ivanoff who suggested that all tissues in which endometriosis arises are embryologically derived from celomic epithelium, i.e. peritoneal cells change into endometrial tissue. Chronic irritation of the peritoneum by menstrual blood may cause celomic metaplasia, which can subsequently result in endometriosis.
•       direct implantation: according to this theory, endometrial tissues are displaced into an implant in the new sites. This explains why endometriosis may be found in surgical scars.
•       genetic and immunologic factors: there is a 5.8 percent familial incidence among immediate female siblings, an 8.1 percent risk if the mother had endometriosis and a 7 percent risk if a female sibling has endometriosis. These figures suggest a polygenic and multifactorial inheritance for endometriosis.
•       lymphatic dissemination: Halban suggested that normal endometrium might "metastasize" via lymphatic channels and thus spread to extrauterine sites where implantation and growth would produce the characteristic lesions of endometriosis.
•       vascular theory: this theory was proposed by Navratil who suggested that normal endometrium was deported via the veins to remote areas of the body.

Pathology
There are three diagnostic histologic features of endometriosis. They are:

The typical lesion will show an abundance of inflammatory cells and fibrous connective tissue.

Ovarian endometriosis occurs in the form of small superficial deposits on the surface of the ovary or as larger cysts which may be up to 10cm in size (known as endometriomas or "chocolate cysts" and which may rupture. In the ovary, the process is almost always bilateral. There is usually considerable fibrosis and puckering of the ovarian surface in the region of the cyst as well as adherence to neighbouring structures.

In the other most frequently involved areas, i.e., throughout the pelvic peritoneum, the lesions are normally smaller and more numerous and are surrounded by dense, fibrous scar tissue.

Clinical manifestations
The most commonly seen symptoms and signs of endometriosis are as follows:

It is important to note, however, that 30-35% of patients with endometriosis do not suffer any pain or discomfort, though they may suffer from other manifestations such as infertility or pelvic masses. Also, there is no direct correlation between the severity of the pain and the extent of endometriosis: thus, a woman with advanced endometriosis may suffer less pain than a woman with the beginning stages of the disease.

Diagnosis
Diagnosis of endometriosis is made principally by taking a clinical history. If it is suspected, confirmation is usually obtained by laparoscopy which shows endometriotic cysts and deposits. Definitive diagnosis can be made by microscopic examination of excised tissue that demonstrates both glands and stroma.

Diagnosis is, however, fraught with difficulties and is affected by subjectivity. Laparoscopy relies entirely on the visual and very subjective assessment of the pelvis by the operator and consequently is prone to misinterpretation and subjectivity. Another difficulty is that the symptoms of endometriosis are very similar to those of other diseases, e.g. pelvic inflammatory disease, ovarian tumours and irritable bowel syndrome making differential diagnosis problematic. 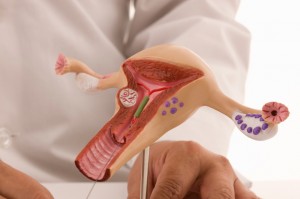 Intercourse during menstruation
When a woman becomes sexually aroused, the Minister Fire goes upwards. If this happens when menstrual blood is flowing downwards, the two will "meet", blocking each other and therefore leading to stagnation of Qi and Blood in the Uterus.

Excessive exercise, especially at puberty, during the period or when pregnant, will weaken the Spleen and Kidneys possibly leading to a whole host of problems including a deficiency of Yin, Yang, Qi or Blood and stagnation of Qi and Blood.

External Cold
Women are particularly prone to invasion of Cold just before, during and just after the period, as well as just after childbirth. When Cold invades the Uterus, it contracts causing Blood to stagnate.

Pathology
The Western disease entity of "endometriosis" broadly corresponds to the Chinese disease-symptom of "Painful Periods": in other words, the pathology, patterns and treatment for Painful Periods is applicable to endometriosis. However, there is an important difference. It is generally agreed by all Chinese gynaecologists that in endometriosis there is always Blood stasis and that endometriosis should be treated as "Abdominal Masses" in Chinese gynaecology. In other words, the endometrial lesions should be considered a form of abdominal masses even though they are not palpable. The important implication of this is that, in the herbal treatment, herbs that "break Blood" and dissolve masses should be chosen.

I.    In endometriosis there is always Blood stasis, but in infertility due to endometriosis there are other factors at play and especially Kidney-Yang deficiency causing a luteal insufficiency. In treatment, place the emphasis on Biao, i.e. Blood stasis only if the period is very painful.
II.    There is always a Kidney deficiency and disharmony of Liver and Spleen
III.    Retention of menses is an important factor, often occurring after childbirth. "Retention of menses" refers to an insufficient discharge of blood during menstruation.
IV.    The temperature chart is flat in endometriosis for two reasons, one due to Biao, the other to Ben. The temperature does not decrease enough during the period because of Blood stasis (Biao) and it does not increase enough after ovulation due to Kidney-Yang deficiency (Ben).
V.    Yang not growing enough during phase 4 so that Yin pathogenic factors are not expelled (see Winter 2002 Newsletter).
VI.      As modern women have a much higher number of menstrual cycle throughout their lifetime, it means they will have all the more "retention of menses". This is due to earlier menarche, later menopause, fewer children, shorter breastfeeding.

The main patterns appearing in endometriosis and the relevant remedies are as follows: