Asian Ginseng is one of the most highly regarded of herbal medicines in the Orient, where it has gained an almost magical reputation for being able to promote health, general body vigour, to prolong life and treat many ailments including depression, diabetes, fatigue, ageing, inflammations, internal degeneration, nausea, tumours, pulmonary problems, dyspepsia, vomiting, nervousness, stress, and ulcers.

Asian Ginseng has a history of herbal use going back over 5,000 years. It is one of the most highly regarded of herbal medicines in the Orient, where it has gained an almost magical reputation for being able to promote health, general body vigour and also to prolong life. The genus name Panax is derived from the Greek word meaning "panacea" or "all-healing"; the species ginseng is said to mean "wonder of the world". Both terms refer to the medicinal virtues of the plant. In the last decade it has gained popularity in the West and there is extensive literature on the beneficial effects of ginseng and its constituents.

Panax Ginseng is thought to be even more beneficial when taken with Ginkgo Biloba.

Ginseng has been listed by some as useful in the treatment of anemia, cancer, depression, diabetes, fatigue, hypertension, insomnia, shock, effects of radiation, effects of morphine and cocaine use, environmental, physical and mental stress, and chronic illness. It has been said to act as a stimulant, promote endurance, increase life expectancy, relax the nervous system, improve mental awareness, encourage proper hormonal functions, improve lipid levels, lower cholesterol, improve nerve growth, and increase resistance to disease. It has been used to increase the appetite and bodily energy, regulate menses, ease childbirth, increase fertility of women, and treat periodontal disease

Research has shown that ginseng may have the ability to act as an "adaptogen", prolonging life by combating viral infections and Pseudomonas aeruginosa. Research continues to support ginseng's protective role against anti-cancer treatments and drugs, perhaps even countering the side effects of chemotherapy.


There is some thought that ginseng may be useful for the prevention of abuse and dependence of opioids and psychostimulants.

Ginseng has been used to both stimulate and relax the nervous system. It increases capillary circulation in the brain and decreases the effects of stress. Though there are many kinds of ginsengs in the world but they cannot rival Asian Ginseng in ingredients and medicinal effects. It contains as many as 29 different ginsenosides while the others contains 8-9.

Asian Ginseng contains anti-ageing substances such as anti-oxidants and insulin-like substances which are not found in any other type of ginseng.

Ginsenosides are a diverse group of steroidal saponins, which demonstrate the ability to target a myriad of tissues, producing an array of pharmacological responses. However, many mechanisms of ginsenoside activity still remain unknown. Since ginsenosides and other constituents of ginseng produce effects that are different from one another, and a single ginsenoside initiates multiple actions in the same tissue, the overall pharmacology of ginseng is remains remarkably complex and esoteric. 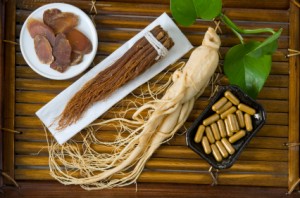 In western herbal medicine, Panax ginseng's regulating effects on the immune system have been studied for potential effectiveness in preventing colds, flu, and some forms of cancer. In clinical studies, Panax Ginseng has been shown to lower blood levels of both sugar and cholesterol, therefore it may help treat type 2 diabetes and high cholesterol. Its other potential uses are not as well defined, however. In separate studies of laboratory animals and humans, Panax ginseng had a relaxing effect on muscles in the lungs. The resulting airway expansion may help relieve asthma symptoms and other lung conditions that result from constricted airways.

In other studies, a combination of Panax Ginseng and gingko biloba is believed to boost memory and thinking processes. Early results from laboratory study may show that chemicals in Panax ginseng promote the growth of blood vessels, which could be valuable in treating extensive injuries.

Recent reports on the pharmacology of ginseng indicate a wide range of effects, including influence on the central nervous system, endocrine and adrenocortical systems, internal, organs, metabolism, blood pressure and sugar, gonadotropic activity, cellular ageing, tumours, and stress. Ginseng appears to relieve stress, increase sexual activity, and facilitate mating in laboratory animals. The herb has been reported to be effective in prolonging survival time during cardiac arrest. It is reported to show hypoglycemic activity. Asian Ginseng has also been identified to protect the testis against 2,3,7,8-tetrachloro-di-benzo-di-p-DIOXIN inducing testicular damage. This particular dioxin is the most dangerous of perhaps the most toxic chemical group known to science. Dioxins are known to cause cancer in humans.

Other data shows it works not only in preventing adult diseases including cancer, diabetes, hypertension, and impotence but can also aid in treatment.

German Commission E monograph and WHO support the use of ginseng as a prophylactic and restorative agent for enhancement of mental and physical capacities, in cases of weakness, exhaustion, tiredness, and loss of concentration, and during convalescence (WHO, 1999). In general, ginseng is used as a tonic, stimulant, aphrodisiac, immune booster, blood pressure modulator (lowers and raises, depending on needs), and a modulator of blood sugar level (lowers or raise, depending on needs). 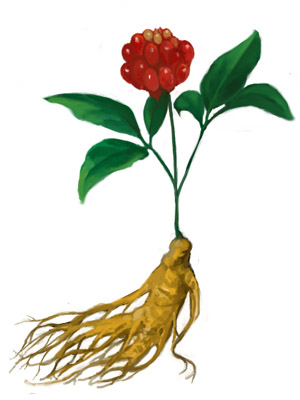 Ginseng should not be taken, without prior consultation with a doctor, if you:

* Are pregnant or breast-feeding
* Have diabetes
* Have high blood pressure
or are taking:

Avoid ginseng if you have an acute illness, uncontrolled high blood pressure, an irregular heart rhythm, or if you are pregnant.

Higher than commonly recommended doses may cause nervousness, insomnia, headache, skin eruptions, stomach upset, and increased menstrual bleeding and breast tenderness. If you experience any of these reactions, reduce your dose or stop taking the herb.

Panax ginseng is different from American ginseng and Eleuthero (Siberian ginseng). They are not interchangeable.