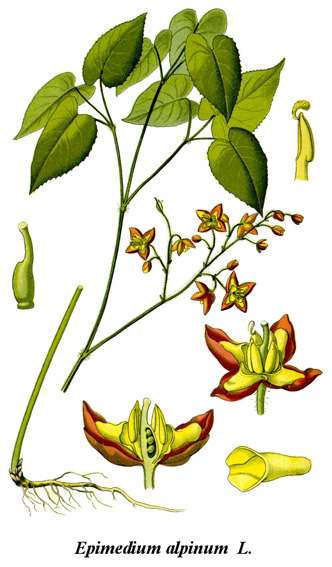 One of the principal active ingredients in Horny Goats weed is "icariin". The concentration may determine much of the potency of each particular species of Epimedium. The icariin works by relaxing smooth muscle tissue, which is different from skeletal muscle tissue. The significance of this is that involuntary tension in the internal tissues can be relaxed, which many believe cause the central nervous system to shift from the so-called fight/flight mode into the rest/restore mode. When this change occurs, many elements of a disease tend to reverse because the body is no longer in a stressed condition. Although this may not cure many problems, especially the ones that are in advanced stages, many people use herbs to manage their condition and obtain some relief.

One should realize that although the plant may bear the same name, there are close to 60 species of Epimedium plants and over 15 in China that bears the name "Yin Yang Huo." It might be difficult for the layperson to determine the strength and properties of the plant based on the name alone. 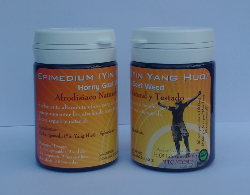 Secondary benefits can also occur when the smooth muscle tissues relax. The health benefits could extend to relieving fatigue in both the mind and the body, as this herb is employed for this purpose in TCM. It has been used to treat joint pain, numbness, memory problems, painful or cold low back and/or knees, as well as irregular menstrual cycles, spermatorrhea, and impotence. It has been cited as producing an anti-aging effect and can improve the immune system as well as the endocrine system.