Originally described by Stein and Leventhal, Polycystic ovary syndrome (PCOS) is one of the most common endocrinopathies in women of reproductive age. According to the initial description by Stein and Leventhal in 1935, the diagnosis of PCOS was based on the clinical symptoms (oligo/amenorrhoea, infertility, hirsutism, and obesity) in the presence of histologically verified polycystic ovaries. Presently, ovarian morphology can easily be identified by ultrasound, which has revealed that PCOS is not only linked to the "classic Stein-Leventhal syndrome", but women with polycystic ovaries exhibit a wide spectrum of clinical presentations.

PCOS account for 75% of women with anovulatory infertility, 30% to 49% of secondary amenorrhea, and 85% to 90% of women with oligomenorrhea. The majority of patients with PCOS are hirsute. Obesity is also a frequent finding among women with PCOS. 30 to 60% of PCOS patients are overweight.

PCOS often comes to light during puberty due to period problems, which affect around 75% of those with the disease. Infrequent, irregular or absent periods are all common variations, many finding their periods particularly heavy when they do arrive. The period disturbance is a sign that there is a problem with regular monthly ovulation. Many teenagers use the contraceptive pill to control their periods as irregularity or heaviness is a common complaint at this time, even in the absence of PCOS. This often leads to a delay in the diagnosis of PCOS, many not presenting until the pill is stopped and finding periods cease or become irregular.

Endocrinology
Endocrinologically PCOS is also heterogenous; classically it is characterized by hyperandrogenism, inappropriate pituitary gonadotropin secretion, which causes an elevated LH to FSH ratio, and hyperinsulinism.

Ultrasound scan
This is usually done as an internal scan, meaning a small ultrasound probe is placed just inside the vagina, giving the best views of the ovaries and pelvic organs. In PCOS, the ovaries are found to have multiple, small cysts around the edge of the ovary. These cysts are only a few millimetres in size, do not in themselves cause problems and are partially developed eggs that were not released.

Blood tests
A couple of blood tests will assist in making the diagnosis - one to check the level of androgens, such as testosterone. Another test will measure the hormones involved in egg development - in PCOS there is a characteristic rise in lutenising hormone (LH). A progesterone blood test 7 days before the expected menstrual period can check if the woman is ovulating.

Although 60 years have passed since the first description of the syndrome, its definition and diagnostic criteria are still controversial. Several hormonal assays have been widely used to support the diagnosis, and are essential for exclusion of specific disorders which can cause polycystic ovaries. Accurate endocrine characterization of patients enables the recognition of biochemically more homogeneous subgroups of PCOS, which further provides facilities to better evaluate the pathogenesis of each of these subsets, and provide data necessary for formulating specific therapy.

I.    Obesity
II.    Amenorrhoea or oligomenorrhoea
III.    Infertility. Given that the period disruption with PCOS is due to irregular or absent ovulation it is not surprising that it is a common cause of infertility. It is not usually 100% absolute, and some women with PCOS will ovulate normally, some will ovulate less frequently (leading to a delay to pregnancy) and some will not ovulate at all.
IV.    ïHirsutism
V.    Ovaries are enlarged and smooth. The tunica albuginea is thickened and beneath it are numerous small cystic follicles, varying in size but seldom exceeding .5 cm in diameter.
VI.    Failure of the ovarian enzyme system which are necessary for the production of oestrogen.
VII.    Reduced oestrogen
VIII.    Raised testosterone
IX.    Raised ratio LH:FSH 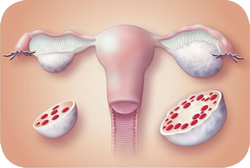 Periods may be controlled by the use of the contraceptive pill, which is most suitable for women under the age of 35 who also require a good form of contraception. The other type of drug used is a progesterone-like hormone. Progesterone is the main hormone of the second half of the menstrual cycle, maintaining its length and helping reduce the heaviness. Progestagens are taken as tablets in a cyclical way, for example between days 12-26, the exact type and timing depending upon the woman's individual cycle problem.

Some women have no periods at all, and either the contraceptive pill or cyclical progestagens are advisable to avoid the risk of endometrial cancer. Around 6 periods per year is adequate to protect against this.
CHINESE MEDICINE PERSPECTIVE

From a purely Chinese medicine perspective, i.e. ignoring hormonal changes and histological changes in the ovaries, the clinical manifestations are:

I.    Amenorrhoea or scanty periods: deficiency of Blood of the Chong Mai; also Blood stasis within the Chong Mai. Menstrual blood is a manifestation of Tian Gui and therefore there is always a Kidney deficiency which may be Yin or Yang
II.    Hirsutism: dysfunction of the Chong Mai with imbalance between Qi and Blood. A deficiency of Blood in the Uterus leads to amenorrhoea, but this would mean that there is more Blood available at the skin level to promote the growth of hair
III.    Obesity: Damp-Phlegm affecting both the Chong Mai and the Ren Mai
IV.      Ovarian cysts: Damp-Phlegm in the Chong and Ren
V.    Hormonal imbalance, raised testosterone: dysfunction of the Du Mai, the Yang aspect of the menstrual cycle
VI.    Hormonal imbalance, raised LH: an increase in Yang (but only relative to Yin, oestrogen) and therefore a condition of Heat in the Liver and Chong Mai.

Explanation of clinical manifestations according to patterns

DAMP-PHLEGM IN THE UTERUS

In addition, there may be some general symptoms of Phlegm such as expectoration of phlegm and a feeling of oppression of the chest.*

Although it contains one Kidney tonic (Tu Si Zi), Clear the Palace is primarily to resolve Damp-Phlegm and treat infertility resulting from obstruction of the uterus by Damp-Phlegm.

Rather than discuss individual patterns, I will discuss common combinations of patterns.